Scientists have decoded the DNA of the Western honeybee, a feat that researchers say could help illuminate the genetic underpinnings of social behavior. 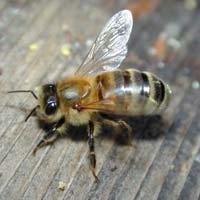 An international team of nearly 200 scientists reported today that they had identified 10,157 genes. That's fewer than those in the genomes of the fruit fly, mosquito or silkworm, but sufficient to produce the only non-primate species that communicates through a symbolic language, reports Los Angeles Times.

According to Scotsman, an international team from the UK, the United States, Israel and Germany has established that honeybees probably originated in Africa and spread into Europe in two separate ancient migrations.

Honeybees also have a large number of genes related to smell, enabling them to communicate effectively using scent and to sniff out food. However, they may struggle to taste nectar, with far fewer genes involved in this sense than other insects.

Scientists in Israel found that a bee's body clock is more like a mammal's than a fly's. Knowing the time is important to bees' navigation, as they use the sun.

Professor Gene Robinson, the director of Illinois University's bee research centre and a key member of the Honeybee Genome Sequencing Consortium, said the project was

"ushering in a bright era of bee research, for the benefit of agriculture, biological research and human health.

"Honeybees are the premier pollinators on earth and play a vital role in food supply. In biology and biomedicine, honeybees are used to study many diverse areas, including allergic disease, development, gerontology, neuroscience, social behaviour and venom toxicology."

One of the main findings, contained in the journal Nature, is that the honeybee genome evolved more slowly than that of fruitflies and mosquitoes and that the first true bee probably evolved in Africa.

Dr Martin Lercher, a researcher at Bath University, said: "People had thought bees were close relatives of flies and butterflies, but we found that beetles are closer relatives to flies than bees. If you want to understand the evolution of social lifestyles, that's important."

A few "master regulator" genes known to function in the development of fruit flies have been implicated in regulating the activity of these thousands of genes. It appears that master regulator genes involved in nervous-system development in fruit flies are re-used by nature for behavioral functions in adult honeybees. The findings could have significant implications for honeybee breeding and the crucial role these creatures play in farming worldwide, according to the scientists, informs Xinhua.