An ethics panel on Wednesday approved a London hospital's plan to carry out what could be the world's first full-face transplant, but no candidates for the surgery have yet been selected, a spokesman said. 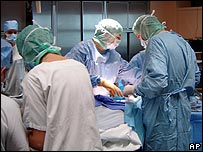 The Special Ethics Committee of the Royal Free Hospital approved a proposal for a series of four transplant operations, said Neil Huband, spokesman for The Face Trust.

"What happens next is that we continue going through the details of patients and looking to potential patients and continue research," Huband said.

He said a list of candidates for the operations could be completed within six months or a year.

French surgeons carried out the first partial face transplant last year. The Cleveland Clinic in the United States is also working on plans for full-face transplants.

Since receiving permission last year to identify potential patients, the transplant team headed by Dr. Peter Butler has identified 34 possible candidates but has not yet begun formally evaluating their suitability for surgery, the trust said.

During 15 hours of surgery, a team of doctors replaced a gaping hole left after she was mauled by a dog with a partial face that included a new nose, mouth and chin.

Butler said his team had been contacted by 34 people from across the world but would welcome more applications.

The patients are all likely to be those with injuries such as severe burns affecting the whole face.

"They have reached the end of the reconstructive ladder and there's nothing more it can offer them."

Such patients may have continuing problems such as being unable to fully close their mouths or eyelids.

"Then they have the problem of integration into society, of being able to walk down the street in society without anybody staring at them. That's all these people want to be normal," Butler said.