Scientists at the University of Wyoming in Laramie are working to unfold the numerous unknown medical applications of spider web silk. For decades, it has been known that spider web silk is the strongest natural fiber, but its medical potential remains a mystery. 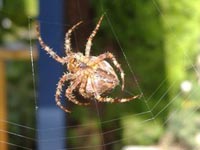 To investigate, Lewis and his team are now spinning spider silks into fibers.

Lewis said researchers at Tufts University in Medford, Mass., have found that spider webs could be used as scaffolds for regenerating ligaments damaged in one of the world's most common knee injuries - ruptured anterior cruciate ligaments, or ACLs, reports All Headline News.

"Right now we haven't even optimized the silks we've produced yet, and we're in the ballpark of the material properties you'd want for artificial tendons and ligaments," said molecular biologist Randoph Lewis at the University of Wyoming in Laramie.

Although modern research has uncovered no evidence that spider webs can kill germs, Lewis explained, studies on animals have shown spider silk triggers little if any immune responses, which cause rejection of medical implants.

Spider web medicine was even acknowledged by William Shakespeare in "A Midsummer Night's Dream" where the character named Bottom said, "Good Master Cobweb: if I cut my finger, I shall make bold with you", informs Xinhua.

According to FOX News, to mass-produce spider silk, Lewis said "our lab is pursuing the production of spider silk in alfalfa."

Other researchers are experimenting with producing spider-silk proteins in goat milk. Scientists generate these proteins outside spiders by inserting the genes for them into target cells.