Mother Earth is beginning to resemble a Peggy Lee song — "fever in the morning, fever all through the night." 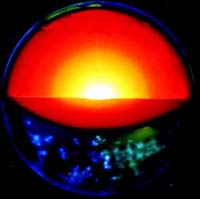 The planet's temperature has climbed to levels not seen in thousands of years, warming that has begun to affect plants and animals, researchers report in Tuesday's issue of Proceedings of the National Academy of Sciences

The Earth has been warming at a rate of 0.36 degree Fahrenheit per decade for the last 30 years, according to the research team led by James Hansen of NASA's Goddard Institute for Space Studies in New York, informs Houston Chronicle.

According to Xinhua, that brings the overall temperature to the warmest in the current interglacial period, which began about 12,000 years ago, said James Hansen, who led the research team.

The researchers noted that 1,700 plant, animal and insect species moved poleward at an average rate of about 6.4 km per decade in the last 50 years.

The warming has been stronger in the far north, where melting ice and snow expose darker land and rocks beneath allowing more warmth from the sun to be absorbed more over land than water.

Water changes temperature more slowly than land because of its greater capacity to hold heat, but the researchers said that warming has been marked in the Indian and western Pacific Oceans. Those oceans have a major effect on climate and warming that could lead to more El Nino episodes affecting the weather.

James Hansen NASA's Goddard Institute for Space Studies in New York, said,"If further global warming reaches 2 or 3 degrees Celsius, we will likely see changes that make Earth a different planet than the one we know. The last time it was that warm was in the middle Pliocene, about 3 million years ago, when sea level was estimated to have been about 25 meters (80 feet) higher than today."

The researchers say although warming is most noticeable at the poles, higher latitudes are still among the coolest spots around. For animals and plants that can survive only within certain cool temperature ranges, these will be the only places to go as their current homes become intolerably warm.

In a study done in 2003, it has been brought out that nearly 1,700 plant and animal species had moved toward the poles at about 4 miles per decade in the last 50 years.

Hanson said this migration rate is not fast enough to keep up with the current rate of movement of a given temperature zone, which has reached about 25 miles per decade in the period 1975 to 2005, informs Earthtimes.