New images from the European Space Agency (ESA) show that the Red Planet's famous "Face on Mars" is nothing but a eroded hill. 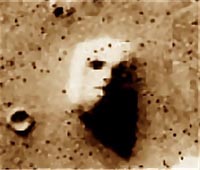 The Face on Mars myth is based on a photo of Mars' Cydonia region taken by NASA's Viking probes in 1976. In the picture, the rock formation gives the appearance of a human face "formed by shadows giving the illusion of eyes, nose and mouth" as described in a NASA news release from July 31st, 1976.

ESA's new photos come after multiple attempts to image the Cydonia region between April 2004 and July 2006 were "frustrated by altitude and atmospheric dust and haze" according to the agency.

"These images of the Cydonia region on Mars are truly spectacular," said Dr Agustin Chicarro, ESA Mars Express Project Scientist. "They not only provide a completely fresh and detailed view of an area famous to fans of space myths worldwide, but also provide an impressive close-up over an area of great interest for planetary geologists, and show once more the high capability of the Mars Express camera," informs Mongabay.

According to Discovery Channel, NASA’s chief scientist for Mars exploration, Jim Garvin, describes the formation as the equivalent of a butte or mesa, landforms common around the American West. Such formations are common in Mars’ Cydonia region, which is located between the planet’s southern highlands and northern plains.

But then, some may never be convinced.

Since the spooky, face-like structure was first photographed by NASA’s Viking 1 Orbiter 30 years ago, the site has been the subject of breathless speculation.

In movies, books and on the Web, some have argued this is a massive sculpture built by intelligent life and that surrounding conical-like structures are pyramids, or remnants of a great city, built by a complex civilization.

According to Astrobiology Magazine, on 22 July, the HRSC finally met success during orbit 3253, and a wide area in Cydonia was imaged at the best possible resolution and in 3D. Actually, in addition to the well-known face and pyramids, a naturally skull-shaped structure also appears in some images. As the famous scientist and writer Carl Sagan said, "Imagination will often carry us to worlds that never were. But without it we go nowhere."