Crisps every day equal to five litres fat a year

Parents definitely will get a shock after hearing that their children are not just eating a packet of crisps a day rather consuming almost five litres of cooking oil a year. This shocking fact was revealed by British Heart Foundation, which makes intensive efforts to combat premature death and disability from cardiovascular diseases. 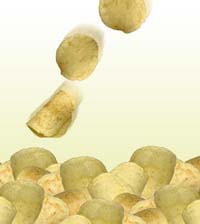 Crisps every day equal to five litres fat a year

According to the figures released by the British Heart Foundation (BHF), 50% of children admit to eating at least one packet of crisps daily and one in five children, aged 8 to 15, is consuming two packets or more of crisps a day which is equal to at least nine litres of oil a year, informs The Money Times.

According to Times Online, Professor Peter Weissberg, medical director of the British Heart Foundation, said: “The BHF believes that having a daily dose of such a high-fat, nutritionally poor product is a threat to children’s long-term health. “Daily unhealthy snacking is a worrying habit. Rising rates of childhood obesity and cases of type 2 diabetes paint a particularly grim picture for the future,” he said. “The BHF wants to expose the truth lurking within these foods and to help children and parents make healthier choices.”

The foundation said that the crisp habit was just one aspect of unhealthy eating. It added that almost three quarters of mothers fed their children ready or takeaway meals more than three times a week. And according to a 2004 report, only 13 per cent of boys and 12 per cent of girls reported eating the recommended five portions of fruit and vegetables daily.

A shocking new advertising campaign will feature a young girl drinking from a bottle of cooking oil, with the caption "What goes into crisps goes into you".

Around 2,500 schools across the UK will also be sent teaching resources in the shape of over-sized burger boxes, in a bid to make children more aware of the potential damage that certain foods can do to their hearts.

FDF Communications Director Julian Hunt said: "We welcome anything that raises the debate about diet, but scare tactics are a waste of time. One of the great things about our industry is that we strive to give consumers genuine choice, whether it is a better for you version or a completely reformulated standard product" , informs Guardian Unlimited.