Ten years after Californians voted to decriminalize marijuana for medical purposes, conservative San Diego County is leading a backlash against the groundbreaking law. 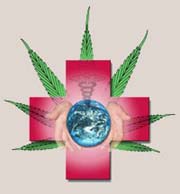 While liberal strongholds like San Francisco and Santa Cruz have created identification cards for sick patients who use marijuana and wrote regulations to permit storefront pot dispensaries, San Diego County is challenging California's medical marijuana law in state court, saying it should not be required to comply with a state law directing counties to issue ID cards to users. At the same time, local police, working with federal agents, have shuttered all of the nearly 30 marijuana dispensaries in the county.

San Diego's legal showdown pits state laws that permit marijuana use for medical reasons against federal laws that prohibit the drug. At stake: California's decade-old law and the industry it spawned, with potentially far-reaching consequences for other states.

"This is the first time that a county has said that the state is forcing them to do something they don't want to do," said Anjuli Verma, director of advocacy for the Drug Law Reform Project of the American Civil Liberties Union. "If they prevail, it will set a precedent that basically means medical marijuana laws are over."

California's law allows people suffering from AIDS, cancer, anorexia, chronic pain, arthritis and migraine and "any other illness for which marijuana provides relief" to grow or possess small amounts of marijuana with a doctor's recommendation.

In 2003, the California Legislature amended the 1996 bill to direct county health departments to issue ID cards to medical marijuana users.