An experimental treatment for bone-thinning osteoporosis appears to prevent spine and hip fractures even though it is given only once a year, eliminating the need for a strict daily pill regimen, preliminary data show. 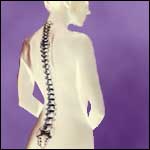 Reclast, given as an annual, 15-minute infusion, reduced risk of new spine fractures by 70 percent and of hip fractures by 40 percent, according to data supplied by maker Novartis Pharmaceuticals Corp. The drug, chemically known as zoledronic acid, also reduced the risk of fractures elsewhere, according to a just-completed, international study of 7,736 postmenopausal women with osteoporosis.

The data, from final-stage human testing, was to be presented Saturday at the annual meeting of the American Society of Bone and Mineral Research in Philadelphia.

"This is very good news," said Dr. Ethel Siris (SEYE' riss), president of the National Osteoporosis Foundation and director of the Osteoporosis Center at Columbia University.

"Because it can be given once a year, it's going to be terrific for women who like that option," said Siris, who has consulted for Novartis and other drug companies.

Novartis plans to apply for U.S. approval to sell Reclast early next year.

Lead researcher Dennis Black, a professor of epidemiology at University of California-San Francisco, said that like Fosamax and other pills, Reclast slows down the speed at which cells called osteoclasts break down bone while other cells build it back up, reports AP.

"If you take Fosamax every week for a year, you'll get a similar effect on bone density," Black said.

He noted that Reclast is part of a decade-long trend of researchers developing osteoporosis drugs taken less and less frequently: Some pills are taken only once a month, and one drug is available as a shot every three months.