Neanderthals' last stand was in Gibraltar

Neanderthals survived for thousands of years longer than scientists thought, with small lingering bands finding refuge in a massive cave near the southern tip of Spain, new research suggests. 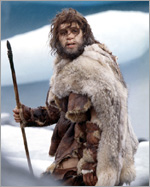 Neanderthals' last stand was in Gibraltar

The work contends that Neanderthals were using a cave in Gibraltar at least 2,000 years later than their presence had been firmly documented anywhere before, researchers said.

"Maybe these are the last ones," said Clive Finlayson of The Gibraltar Museum, who reported the findings Wednesday with colleagues on the Web site of the journal Nature.

The paper says charcoal samples from fires that Neanderthals set in the cave are about 28,000 years old and maybe just 24,000 years old.

Experts are divided on how strong a case the paper makes, reports ABC News.

Previous estimates have put the extinction of the Neanderthals around 30,000-33,000 years ago. But the date is fiercely debated, as is an even greater mystery: who, or what, killed them?

The new piece in the puzzle comes from artefacts found at a site on Gibraltar called Gorham’s Cave, where Neanderthal stone tools were discovered more than 50 years ago. Further excavations of the cave floor between 1999 and 2005 have exposed the remains of hearths where Neanderthals, known to be skilled with flints, would keep a fire.

The researchers used a technique called accelerator mass spectrometry to date pieces of charcoal found in the hearths, and conclude Neanderthals definitely lived there until 28,000 years years ago “and possibly as recently as 24,000 years” ago.

Wrongly lampooned in popular humour as moronic grunters, the Neanderthals had the smarts to choose an excellent site for their redoubt, according to the paper, published on Thursday in Nature.

Natural light penetrated deep within the cave’s walls and a high ceiling allowed smoke to ventilate. The location, too, was a winner, informs Daily News & Analysis.