The beneficial effects start less than 2 hours after the drug is given and last for about 7 days, according to results of a study conducted by investigators at the National Institutes of Health in Bethesda, Maryland, Reuters reports. 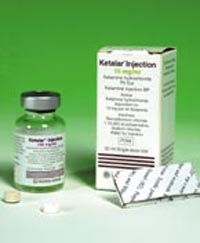 The study, based on a small sample, is part of a push by researchers to develop treatments that can bring quick relief to patients with mental disorders. Patients and their doctors report it often takes weeks or months for most available antidepressants to improve symptoms.

The participants were all depression sufferers who had tried an average of six treatments that had failed. The researchers then measured their levels of depression minutes, hours and days after the dose was given, BBC News reports.

Lead researcher Dr Carlos Zarate Junior, head of the mood and anxiety disorders programme at NIMH, said: "Within 110 minutes, half of the patients given ketamine showed a 50% decrease in symptoms."

By the end of day one, he added, 71% had responded to the drug. And at this point the team found 29% of these patients were nearly symptom free.

Much more work needs to be done before patients can see benefits from the breakthrough, the researchers said. Among the unanswered questions are whether patients will be able to tolerate the drug for long periods, and whether it will continue to be effective.

Researchers said they hope the finding will prompt the pharmaceutical industry to develop similar compounds with fewer side effects that can then be tested on a large scale, Seattle Times reports.