Separating the layers of sediment from an ancient lake was like turning the pages of a book to get a glimpse of life in the time of dinosaurs, an international team of scientists said Thursday. 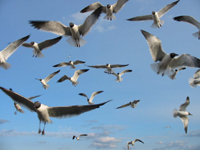 "A world lost for more than 100 million years was being revealed to us," said Hai-lu You of the Chinese Academy of Geological Sciences.

What they found is being called the missing link on the evolution of birds, a loon-like creature that lived in northwest China and is the earliest example of modern birds that populate the planet today.

Before their discovery, reported in Friday's issue of the journal Science, the only evidence for this creature - Gansus yumenensis - was a single, partial leg discovered in the 1980s.

According to New York Times, birds first evolved at least 40 million years before Gansus lived, but early birds like Archaeopteryx looked much like the dinosaurs most paleontologists believe birds descended from. Gansus instead possessed skeletal features that are seen in modern birds — for example, the bones in the ankle and upper foot were fused together.

"All other birds from the early Cretaceous period are not as closely related to modern birds as this one is," Dr. Lamanna said.

At the time Gansus lived, the prevalent bird in most parts of the sky was a type known as "opposite birds" because some bones in their shoulder and feet were reversed compared to present-day birds. But at the Chinese lake, Gansus appears to have been the most common bird — about 80 percent of the bird fossils found so far have been of Gansus, not opposite birds. That might eventually offer some clues of how modern birds later rose to dominance while the opposite birds went extinct, along with the dinosaurs, 65 million years ago.

In building the family tree of birds, the scientists also saw noticed that most of the close relatives of modern birds lived in or around water. "We noticed that a sequence of aquatic birds led up to the modern birds," Dr. Lamanna said.

Peter Dodson, professor of anatomy the University of Pennsylvania, who oversaw the research, said, "Gansus is very close to a modern bird and helps fill in the big gap between clearly non-modern birds and the explosion of early birds that marked the Cretaceous period, the final era of the Dinosaur Age."

The five skeletons come from an exceptionally rich fossil bed in China's Gansu Province, in a poor farming area near Changma, 1,200 miles west of Beijing.

In the Cretaceous period, 100 million years ago, it would have been a lake, surrounded by lush plant life, filled with crocodiles and fish, and with dinosaurs and early mammals prowling on land.

Now the lake bed survives as layers of rock.

"You can walk up to a rock and peel off sheet after sheet like paper until you get to a fossil," said Jerald Harris of Dixie State College of Utah, informs Reuters.