Once at the mercy of hourly hot flashes, Margaret Corino has been keeping them at bay with regular trips to the gym. 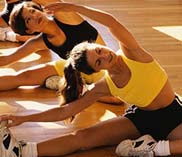 When the 58-year-old woman skips exercise, the waves of heat "shoot back up again," she says. Corino, who lives in Johnson City, west of Albany, says her workouts have reduced hot flashes to just a couple a day.

Though the research is still thin, many health experts say even moderate exercise can help relieve the problems of menopause in some women, including anxiety, insomnia and night sweats.

Menopause, which typically occurs between the ages of 45 and 55, is when a woman stops menstruating. Symptoms can range from mood swings, to hot flashes, headaches and trouble focusing.

The National Institutes of Health is conducting a wide-ranging study of several issues related to menopause, including depression, cognitive and sexual function. NIH-backed research so far only suggests a link between physical activity and decreased symptoms of menopause, no proof exercise is a cure.

For example, women who exercise may report fewer hot flashes simply because they are less preoccupied with such symptoms, said Sheryl Sherman, a doctor with the National Institute on Aging, an arm of NIH.

While experiences vary from woman to woman, some say even a little boost in physical activity goes a long way.

Just a week after starting a walking routine, 54-year-old Joan Newman saw a dramatic decline in hot flashes. "After that, every chance I got, I walked around the campus," said Newman, an administrative assistant at Missouri State University in Springfield, Missouri.

She says her daily walks reduced hot flashes from hourly to five or six a day.

Dr. Lila Nachtigall, a spokeswoman for the North American Menopause Society, said it is critical for women to get exercise at this time of life despite the lack of conclusive evidence that exercise relieves menopausal symptoms.