Despite concerns raised by some engineers, NASA said Friday that it plans to put off any further design changes to the shuttle's external fuel tank until after Discovery's flight in July. 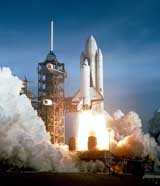 The space agency had been considering changing the design of the tank's so-called ice frost ramps to stop insulating foam from falling off. The ice frost ramps are wedge-shaped brackets that hold in place the tank's pressurization lines.

NASA already has removed 37 pounds (16 1/2 kilograms) of foam from two other areas on the tank  a modification that space shuttle program manager Wayne Hale described as "the largest aerodynamic change we have made to the space shuttle launch system since it first flew."

NASA's top leaders decided to see how those changes hold up during the next launch before making any further alterations, Hale said, reports AP.

The space center has set up what it calls a "road kill posse" to quickly clear as many carcasses as possible from the 6,000-acre site, in hopes of encouraging the vulture population to relocate by cutting off its food supply.

When shuttle Discovery lifted off the launch pad last July on the first flight since the 2003 Columbia accident, it hit a vulture during its climb to orbit.

Discovery did not suffer any damage that time, from the vulture or from the chunks of foam that fell off its fuel tank during launch. But NASA fears collisions with the large, carrion-eating birds could damage shuttle heat shields, leaving the spacecraft vulnerable to an accident like the one that killed Columbia's seven astronauts.

"We need everyone's help," the agency wrote in newsletters distributed to the space center's work force last week. "A crew will be sent to quickly remove the carrion before the vultures are attracted to the free meal."

About 500 pounds of animal carcasses have been removed since the program began two weeks ago, the center said, informs Reuters.

This year, NASA has $4.8 billion for the shuttle and plans to fly twice. It hopes to fly 17 times in all before retiring the orbiter in 2010 and replacing it with a new spaceship. NASA, supposedly the most forward-looking agency in the federal government, is using the biggest single chunk of its budget to fund a dinosaur.

But the agency has no choice: "Conventional wisdom before Columbia was that foam can't be a problem because there's not enough mass," Hale said. "But the people who thought about it didn't think hard enough. Think, instead, about straws driven into a board by hurricanes."

NASA troubleshooters have solved individual tanks' problems but have failed to find a comprehensive solution. Discovery's foam loss last year was unforeseen and unrelated to the casualty that doomed Columbia.

The plan's cornerstone is a next-generation spaceship to replace the shuttle, but while its development proceeds, Bush's plan also requires NASA to fulfill treaty obligations by completing the international space station.

And do it in time to finish the station by 2010. When Bush announced his plan, some experts questioned the wisdom of retiring the shuttle program so quickly, but that criticism has waned, because "every month the shuttle is delayed creates more financial strains," Oman said in a phone interview, according to Washington Post.