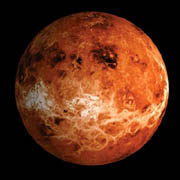 The clouds, 13 miles deep, completely enclose Venus. The new images of the planet's south pole, which is turned away from Earth, closely resemble those of its more familiar north pole.

The images, taken from the European Space Agency's orbiting Venus Express spacecraft from a distance of roughly 124,000 miles, show pale clouds turning around a dark vortex.

"We can see there is a swirl here that is similar to the one we know from the north pole," said Horst Uwe Keller, who leads the team operating the craft's wide-angle camera one of seven instruments aboard the Venus Express.

Using infrared technology that allows the camera to peer though the clouds, scientists hope to be able to determine how the sulfuric acid that swathes the planet was formed, and pinpoint the cause of the high-speed winds that sends it swirling in massive clouds, reports Houston Chronicle.

According to Toronto Star, today, Venus' atmosphere is 97 per cent carbon dioxide, and the planet is wreathed in clouds of sulphuric acid. The planet is apparently condemned to an eternal cycle of global warming, with surface temperatures that hover around 480C.

There are, perhaps, lessons to be learned here. "Venus is very unpleasant," says Hakan Svedhem of the European Space Agency. "We know the greenhouse effect on Earth is a very interesting topic. Maybe with Venus, we can better understand how our own atmosphere works."

On Tuesday, ESA's Venus Express, a honeycombed aluminum spacecraft carrying seven instruments and cloaked in a metallic gold polymer to fend off the heat, successfully completed a 51-minute rocket burn that put it into an elliptical polar orbit. For the next 500 days, with the possibility of extending for another 500, the spacecraft will probe mysteries that have confounded and fascinated scientists since exploration of the planet first began with NASA's Mariner 2 in 1962.