Scientists have processed more than a dozen new photos, including the first color image, taken by the Mars Reconnaissance Orbiter, which safely arrived at the Red Planet last month. 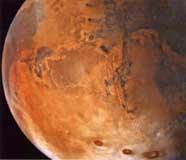 The Reconnaissance Orbiter, the most advanced spacecraft ever sent to another planet, reached Mars on March 10 and slipped into an elliptical orbit. Over the next six months, it will dip into the upper atmosphere to shrink its orbit, lowering itself to 158 miles (254 kilometers) above the surface.

Last month, the orbiter beamed back the first view of Mars from an altitude of 1,547 miles (2,490 kilometers). Those first test images were meant to calibrate the high-resolution camera aboard the spacecraft. The latest images were taken at the same time, but scientists spent several weeks processing them.

The Reconnaissance Orbiter will begin collecting data in November and scientists expect the resolution of those images to be nine times higher.