Tourists and scientists were gathering at spots around the world for a solar show the first total eclipse in years, which will sweep northeast from Brazil to Mongolia, blotting out the sun across swathes of the world's poorest lands. 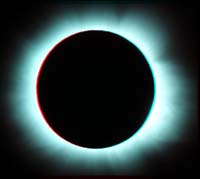 The last such eclipse in November 2003 was best viewed from Antarctica, "so it wasn't the easiest eclipse to see," said Alex Young, a NASA scientist involved in solar research.

Wednesday's eclipse will block the sun in highly populated areas, including West Africa, where governments scrambled to educate people about the dangers of looking at the eclipse without proper eye protection.

In Togo, authorities imported hundreds of thousands of pairs of special glasses that consumers cleared rapidly from shelves in the capital, Lome. But villagers in the interior won't have access to the eyewear and officials called on them to stay home.

"Please, do not go out and keep your children indoors on solar eclipse day," Togo's minister for health said in a message broadcast on state television.

Day will turn to night in the eclipse's route and a corona the usually invisible extended atmosphere of the sun will glow around the edges of the moon as it comes between the earth and the sun.

"Imagine if your hair was to stand up from static electricity, that's kind of what the corona looks like all around the sun," NASA's Young said. But the corona's light can burn eyes.

In Ghana, where the effect will be particularly visible, people were spending about US$1 (about 80 euro cents) for "solar shades" _ paper-rimmed glasses with dark plastic lenses that resemble eyewear used for viewing three-dimensional movies.

Crowds were anticipated in prime viewing points, among them Accra, the capital of Ghana, and in Turkey and India. In Ghana, the University of Cape Coast will broadcast the eclipse simultaneously on the Internet.

NASA said Turkey will be the best spot to view the eclipse, and tens of thousands of tourists were expected along the Turkish Mediterranean coast. Astronomers from NASA and Britain's Royal Institute of Astronomy also were going to an ancient Roman amphitheater in Turkey to view the phenomenon.

The moon is expected to first begin blocking out the sun in the morning in Brazil before the path of greatest blockage migrates to Africa, then on to Turkey and up into Mongolia, where it will fade out with the sunset.

The moon's voyage across the sun will last between five and 10 minutes, Young said, though the sun will only be completely blackened for a few seconds. That's longer than most eclipses, which only last a minute or two, according to a NASA statement.

Superstition will follow around the world, as it has for generations.

One Indian paper advised pregnant women not to go outside during the eclipse to avoid having a blind baby or one with a cleft lip. Food cooked before the eclipse should be thrown out afterward because it will be impure and those who are holding a knife or ax during the eclipse will cut themselves, the Hindustan Times added.

Total eclipses are rare because they require the tilted orbits of the sun, moon and earth to line up exactly so that the moon obscures the sun completely. The next total eclipse will occur in 2008, reports AP.