A natural chemical found in hot peppers may someday become a cure in treating prostate cancer, according to a new study published yesterday in the US journal Cancer Research. 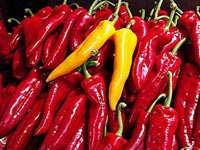 The chemical is called capsaicin, a stubstance in peppers that causes the tongue to burn, eyes to water and sweat to pour out.

Researchers, working in the Samuel Oschin Comprehensive Cancer Institute at Cedars-Sinai Medical Centre, Los Angeles, have now found that capsaicin can also cause human prostate cancer cells to kill themselves by making the cells undergo programmed cell death or apoptosis.

The finding is based on lab tests on mice. Researchers found that capsaicin induced approximately 80 percent of cancer cells growing in mice to follow the molecular pathways leading to apoptosis, reports Xinhua.

In addition, prostate cancer tumors treated with capsaicin were about one-fifth the size of tumors in untreated mice.

"Capsaicin inhibits the growth of human prostate cancer cell in Petri dishes and mice," said lead researcher Dr. H. Phillip Koeffler, director of hematology and oncology at Cedars-Sinai Medical Center and a professor of medicine at the University of California, Los Angeles. Based on the findings, Koeffler believe the next step is a trial to see if it works in patients with prostate cancer.