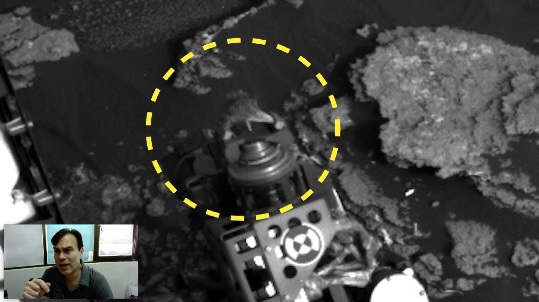 Well-known ufologist Scott Waring claims that Mars could be inhabited by lizards. Waring found the animal on a NASA photo made by Curiosity rover.

The photo shows a bracket with a drilling rig to collect samples of Martian soil. On the rig, the ufologist noticed a small object that does look like a lizard.

Indeed, if one takes a close look at the photo, one can see the muzzle, the legs and the tail of the reptile. Another photo that was taken a few minutes after the first one, shows only sand on the place where the lizard was sitting. The ufologist suggested that the lizard in the picture was alive.