In early February, Boston Dynamics - the company known for its robots - unveiled a four-legged robot, whose lower pair of limbs is equipped with two wheels. The robot was demonstrated in a closed presentation. 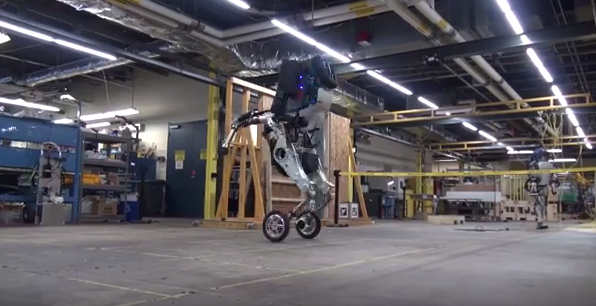 One of the guests made a short demo clip of the robot. The clip appeared on the Internet, but the company has now exposed a full-fledged video of the stunning robotic creature. The unusual robot, named Handle can move on its wheels in a vertical position and looks like a pony on wheels. The robot moves easily on both hard and relatively soft flat surfaces. Amazingly, the robot can jump over obstacles up to 120 cm in height and "walk" down the steps in reverse. The robot keeps balance during sharp movements and can even carry cargo in its arms.

Handle can reach the maximum speed of 14.5 km/h. The battery lets the machine operate for 24 kilometers.

Handle uses a variety of solutions that company engineers applied for the development of bipedal and four-legged robots.