NASA has unveiled new images of the surface of Mars. On the new photos, one can see a chain of giant natural walls on the red planet. 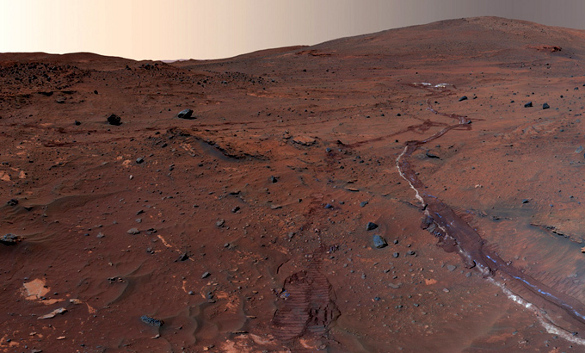 Mars Reconnaissance Orbiter took photos of mountain ridges. The height of some of them is comparable to the height of 16-storey buildings

NASA scientists believe that the walls appeared as a result of volcanic eruptions, when lava filled cracks and froze. For millions of years afterwards, erosion had been oozing soil out of the cracks. Lava was stronger than surrounding rocks and resisted erosion, having thus created natural "walls."

Not that long ago, scientists made curious statements about the existence of oceans of warm water on Mars. The oceans used to exist on the planet owing to periodic emissions of methane, which created the greenhouse effect, thus making the red planet warm enough for the existence of liquid water on its surface, Geophysical Research Letters wrote.

"Early Mars is unique in the sense that it's the one planetary environment, outside Earth, where we can say with confidence that there were at least episodic periods where life could have flourished. If we understand how early Mars operated, it could tell us something about the potential for finding life on other planets outside the solar system," Robin Wordsworth, assistant professor of environmental science and engineering at Harvard said.