US scientists promise to find extraterrestrial life in 20 years 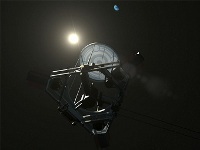 American scientists promise to fulfill the dream of ufologists of the whole world in 20 years.

U.S. space agency experts assured the public that they would find representatives of extraterrestrial civilizations outside the solar system in 20 years, The Register reports.

On July 14th, public hearings was held in Washington, at which experts of the National Aeronautics and Space Administration said that the search for extraterrestrial life would be successful, and pretty soon.

Charles Bolden, a former astronaut, and now an administrator of the U.S. space agency, believes that aliens do exist. Astronaut Sarah Seeger, a professor at the Massachusetts Institute of Technology, shares similar views. She believes that in the near future, exploration of the universe will come to a level, at which astronomers would be able to quickly identify stars and Earth-like planets.

Senior officers at SETI research institute that was established to search for signals from extraterrestrial civilizations pin great hopes on state-of-the-art powerful telescopes, as well as modern data processing systems.