Time may stop in Universe after Earth dies

According to the hypothesis from the scientists of the University of Salamanca, Spain, time will stop in the universe in remote future. Everything will look like as if it is frozen, La Repubblica newspaper said. 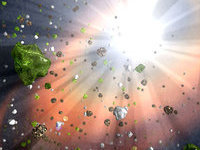 In an article published in Physical Review D journal, the scientists said that time had been slowing down in the universe gradually. In the future, time may come to a standstill.

The specialists presumed that the theory of the continuous expansion of the universe under the influence of dark matter was not correct.  It is not the universe that expands as is commonly believed now - it is time that slows down, says EvroSMI.

Time, the Spanish scientists believe, slows down so slowly that the Earth's population simply does not notice that. However, at some point, when the Earth will cease to exist, time will stop completely, and the universe will look "frozen."

Harry Gibson, a cosmologist at Cambridge University, supports the point of view of his Spanish colleagues. Modern science believes that time appeared in the era of the Big Bang. If it appears, then it may disappear too.