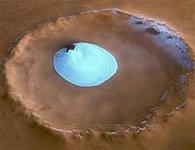 NASA scientists recently discovered an underground dry ice lake containing more carbon dioxide than originally thought. The trapped carbon dioxide is thought to have come from the planet's atmosphere earlier in its history when it was conducive for life on Mars to exist.

"It really is a buried treasure," said Jeffrey Plaut, a scientist of the NASA Jet Propulsion Laboratory, in a report appearing in the journal Science. "We found something underground that no one else realized was there."

The discovery was made possible through ground-penetrating radar of the Mars Reconnaissance Orbiter who is searching for clues of life on Mars, according to .

The newly deposit is about 3,000 cubic miles, or about the volume of Lake Superior, and holds enough carbon dioxide to nearly double the mass of the Martian atmosphere. Mars' atmosphere has a surface pressure less than 1 percent that at Earth's surface at the lowest altitudes. The air on Mars is 95 percent carbon dioxide, while that on Earth is less than 0.04 percent CO2.

"We already knew there is a small perennial cap of carbon-dioxide ice on top of the water ice there, but this buried deposit has about 30 times more dry ice than previously estimated," said Roger Phillips of Southwest Research Institute in Boulder, Colo., in a statement. Phillips is deputy team leader for the Mars Reconnaissance Orbiter's Shallow Radar instrument and lead author of the study, reports.