Volcanoes destroyed 95% of life on sea and 70% on land, study says 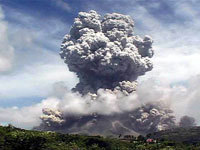 Massive volcanic eruptions that produced ash clouds wiped out nearly 95 percent of life on sea and 70 percent on land.

'This could literally be the smoking gun that explains the latest Permian extinction,' says Steve Grasby, adjunct professor in geoscience at University of Calgary, the journal Nature Geoscience reports.

'Our research is the first to show direct evidence that massive volcanic eruptions - the largest the world has ever witnessed - caused massive coal combustion, thus supporting models for significant generation of greenhouse gases at this time,' says Grasby who led the study, Sify reports.

Researchers at the University of Calgary say they have discovered evidence of what happened at that time - massive volcanic eruptions burnt significant volumes of coal, producing ash clouds that had huge impact on global oceans. The ash plumes from the volcanoes in Siberia traveled to regions now in Canada's Arctic where coal-ash layers where found, International Business Times reports.