A mysterious animal discovered recently in Hood County, Texas, caused local residents to speculate that perhaps they had finally located one of the mythological Mexican El Chupacabra or ‘goat suckers’ that are thought to prowl the area. 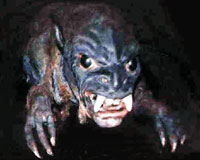 According to a report in the Fort Worth (Texas) Star-Telegram, the vicious looking creature became something of a spectacle last week after animal control officer Frank Hackett shot it dead when it growled at him confrontationally.

However, while it certainly appeared like the stuff of nightmares, the ugly, emaciated and hairless animal has since been identified by scientists at Texas A&M University as little more than a skinny coyote-canine hybrid that had been riddled with the mange and a host of internal parasites, The Tech Herald reports.

The chupacabra first appeared in Puerto Rico in 1995 and sightings soon spread to other Spanish-speaking countries and areas. No hard evidence of its existence has been found — though about a half-dozen alleged chupacabra carcasses have been found in Texas.

The word "chupacabra" originally described a bipedal, spiky-spined vampiric monster said to drain blood from goats and other livestock ("chupacabra" means goat-sucker in Spanish). However in recent years the chupacabra label has simply become a catch-all name for just about any strange, hairless creature that can't be immediately identified by whoever first sees or finds it, according to LiveScience.com.