Thousands of tourists and scientists got a look at a rare total solar eclipse that temporarily plunged parts of the Pacific and Latin America into darkness on Sunday. The path of the eclipse crossed the Pacific Ocean over the Cook Islands and Easter Island before reaching southern Chile and Argentina. 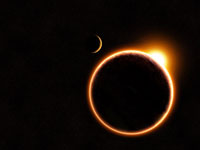 During a total solar eclipse, the moon inserts itself between the Sun and the Earth, and casts a shadow on the Earth, CBS News says.

A solar eclipse happens when the Moon passes between the Sun and the Earth, veiling the Sun as viewed from the Earth.

Scientists say there will be 224 solar eclipses in the twenty first century, of which 77 will be partial, 72 will be annular or ring-shaped eclipses, 68 will be total and 7 will be hybrids between total and annular eclipses.