A solar-powered plane sponsored by Deutsche Bank AG, Germany’s largest bank, and Swiss adventurer Bertrand Piccard took off today from an air field in Switzerland for its first flight at night. The aircraft left the runway at 6:51 a.m. local time for the 24-hour voyage. It was scheduled to climb to 8,500 meters (28,000 feet) to charge its batteries and then descend to 1,500 meters and fly until tomorrow morning. 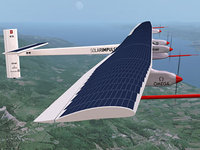 Piccard was the first to circle the globe non-stop in a balloon and his team aims eventually to do the same with their sun-powered plane and its 63-meter wings, about equal to the Airbus A340 wingspan. The project is estimated to cost about 100 million Swiss francs ($94 million), according to Bloomberg.

Bertrand Piccard, initiator and president of the project, said the intention of this test flight was to demonstrate the potential of renewable energy and clean technologies and to promote them among the public.

Solar Impulse HB-SIA is the first aircraft designed to fly day and night without fuel or pollution. A 70-strong team, together with 80 partners, took seven years of hard work, calculations, simulations and tests to build this completely new carbon fibre plane, with its wingspan equivalent to that of an Airbus A340 (63.4 meters) and weighing about the same as a middle-sized car (1600 kg), Xinhua reports.