Ice is Melting on Both Parts of Antarctica

Antarctica is losing ice from its larger eastern side as well as the western part, an indication the southernmost continent may add “significantly more” to rising seas, according to researchers' worried notes. 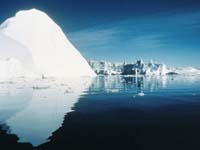 Ice is Melting on Both Parts of Antarctica

The eastern sheet, 10 times the size of the western one, lost about 57 billion metric tons of ice a year from 2002 to 2009, contributing to the continent’s total annual average loss of about 190 billion tons, scientists at the University of Texas at Austin said in the journal Nature Geoscience.

United Nations scientists in 2007 said most of Antarctica’s contribution to rising sea levels amid global warming comes from the western sheet, with the eastern side either holding steady or gaining mass. The continent holds enough ice to raise sea levels by about 57 meters (187 feet), though melting isn’t likely for thousands of years, according to the UN.

The findings for East Antarctica are “surprising” because they differ from other estimates, said glaciologist Jonathan Bamber, who wasn’t involved in the study.

“I’m surprised because other studies for slightly different time periods have come up with values that are very close to zero,” Bamber, professor of physical geography at the University of Bristol in England, said in a telephone interview. “This result really confirms that there are very substantial inconsistencies between different estimates.”

The United Nations Intergovernmental Panel on Climate Change in 2007 said oceans will gain 18 centimeters to 59 centimeters (7 inches to 23 inches) by 2100 and that uncertainty surrounds forecasts for the amount Antarctica will contribute. Bamber said the margin of error for the latest prediction about East Antarctica -- of 52 billion tons -- meant the sheet’s contribution could still be close to zero.

“The margins of error are so large that it can be difficult to draw strong conclusions,” Bamber said, pointing to a 2008 study he co-wrote that estimated East Antarctica’s ice loss at 4 billion tons, with an error margin of 61 billion tons.

Chen said the wide margin of error is largely due to allowances made for a phenomenon called post-glacial rebound, whereby land masses have been rising slowly since the end of the last ice age.

The NASA calculation used a different methodology that involves measuring the speed of ice flow toward the sea and using computer models to estimate precipitation, according to scientists. Using that methodology, ice loss from the frozen continent was estimated at 112 billion tons in 1996.

Bloomberg  has contributed to the report.