It's Hight Time to Clean and Restore Tomb of Tut

Researchers have prepared brushes and paints to start working at the Tomb of Tut. 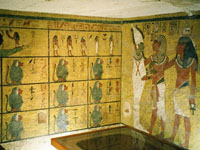 It's Hight Time to Clean and Restore Tomb of Tut

Egypt's famous Tomb of Tutankhamun will undergo a five-year project to clean and restore the lavish wall paintings in the underground chambers of the boy king whose golden mask and artifacts have long awed the world.

The project to restore the country's most famous tomb is the latest collaboration between Egypt's Supreme Council of Antiquities and the Los Angeles-based Getty Conservation Institute, which in the past restored nearby tombs and designed airtight cases to display Egypt's mummies.

Since the small, four-roomed tomb and its famous golden burial mask were discovered in 1922 by British archaeologist Howard Carter, observers have noted strange brown spots marring the wall paintings."I always see the tomb of King Tut and wonder about those spots, which no scientist has been able to explain," said Zahi Hawass, the head of the SCA, in a statement."Now I am happy that the Getty will look at the tomb and preserve its beautiful scenes," he added.

Thousands of tourists visit the underground chambers in the Valley of the Kings every month, bringing heat and humidity, which damage the more than 3,000-year-old tomb.

Tutankhamun wasn't Egypt's most powerful or important king, but his staggering treasures, rumors of a mysterious curse that plagued Carter and his team — debunked by experts long ago — and several books and TV documentaries dedicated to him have added to his intrigue.

Archaeologists in recent years have tried to resolve lingering questions over how he died and his precise royal lineage. In 2005, scientists removed Tut's mummy from his tomb and placed it into a portable CT scanner for 15 minutes to obtain a three-dimensional image. The scans were the first done on an Egyptian mummy.  The procedure detected that Tut was violently murdered around 1323 B.C.

The conservation plan will involve a two-year research period to determine the causes of deterioration, followed by three years of implementation. The SCA said it had yet to decide how long the tomb would be closed during that time.

The Getty Conservation institute works to advance conservation techniques for art, particularly ancient sites, around the world, according to the Associated Press' report.