Researchers found a point of interest in cries of infants from different countries. It turns out that babies cry in the language their parents speak from the first days of life. 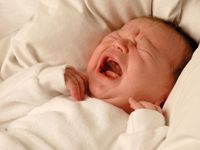 An international team of researchers said a study of 60 newborns suggested babies start to learn language in the womb, long before they utter their first coos or babbles -- and their wails can be distinguished according to the mother tongue.

French newborns tend to cry with a rising melody contour, while their German neighbors prefer a falling melody shape -- patterns which the researchers said fit with characteristic differences between the two languages.

Kathleen Wermke of the University of Wuerzburg in Germany, who conducted the study with French and American colleagues, said it showed newborns "are capable of producing different cry melodies" and that they prefer melodies in the pattern of the language they heard in the womb.

Their analysis, published in journal Current Biology, revealed clear differences in the shape of the newborns' cry melodies, based on their mother tongue.

Previous studies have shown that human fetuses can memorize sounds from the external world by the last three months of pregnancy and are particularly attuned to melodies in both music and language. Vocal imitation studies have also shown babies can match vowel sounds spoken by adults, but only from 12 weeks old.

Wermke's team said their research showed an "extremely early" impact of native language and confirmed that babies' cries are their first proper attempts to communicate specifically with their mothers.