The Verizon Droid is going head-to-head with the Apple iPhone, but could be handicapped by the Android Market app store.On paper, the Droid is more than impressive. It boasts a fast processor, a large display with almost double the resolution of the iPhone, and a slide-out QWERTY keyboard. It packs a 5 megapixel camera with flash and zoom, and a GPS into a slick, attractive package that is certainly comparable to the iPhone in terms of aesthetics. 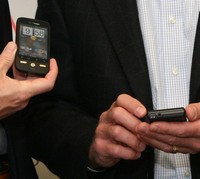 Droid is built on Google's open source Android mobile operating system. Droid is also the first device that will be available with the newest version--Android 2.0 (also referred to as 'Eclair'). The Android operating system is the secret weapon of the Droid, but the Android Market may be the Droid's Achilles heel.

Google made substantial improvements to Android Market with the SDK 1.6 (a.k.a. 'Donut') release of Android a few months back. Donut added the ability for developers to include screenshots and descriptions for their applications, and changed the Android Market so users can browse by most recent addition or featured apps, the top paid apps, and the top free apps, PCWorld reports.

It was also reported, The Droid is made by Motorola and is the first Verizon phone to run on Google's software. It has a touchscreen, as well as a physical keyboard, and can run several applications at once, something the iPhone can't do. Other features include a five megapixel camera with a flash and voice activated search. The device also i n tegrates social networking sites so users can do things like sync Facebook friends in their contacts. The Droid goes on sale next Friday for $200 dollars , ABC News reports.

News agencvies also report, it's pointless to call any phone an iPhone killer, or even a potential iPhone killer -and that competing with the iPhone is much more about software and overall integration than it is about hardware specs. (If you could kill the iPhone through trumping its specs, it would already be a goner.) But the Droid does pack better specs than the iPhone 3GS in many areas-including its screen, which has well over twice as many pixels. It runs the promising Android 2.0 OS. And it's on a network that doesn't provoke much in the way of squawking from its customers. In short, it's the most formidable Google rival since the Palm Pre , PCWorld reports.