A major report confirms what health officials long have believed: Bans on smoking in restaurants, bars and other gathering spots reduce the risk of heart attacks among nonsmokers. 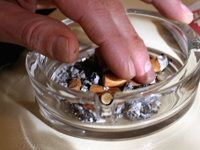 More than 126 million nonsmoking people in the U.S. are regularly exposed to someone else's tobacco smoke. The surgeon general in 2006 cited "overwhelming scientific evidence" that tens of thousands die each year as a result, from heart disease, lung cancer and a list of other illnesses.

Yet smoking bans have remained a hard sell, as lawmakers and business owners debate whether such prohibitions are worth the anger of smoking customers or employees.

"The evidence is clear," said Dr. Thomas Frieden, head of the federal Centers for Disease Control and Prevention, which requested the study. "Smoke-free laws don't hurt business ... but they prevent heart attacks in nonsmokers."

Among the report's conclusions: While heavier exposure to secondhand smoke is worse, there's no safe level. It also cited "compelling" if circumstantial evidence that even less than an hour's exposure might be enough to push someone already at risk of a heart attack over the edge.

While the public mostly connects smoking with lung cancer, heart disease is a more immediate consequence. About a third of all heart attacks in the U.S. are related to smoking.