Danish women who took antidepressants during pregnancy had twice the risk of pre-term delivery as other women, and their babies were more likely to be admitted to an intensive care unit than those of women who did not take the drugs, researchers reported on Monday. 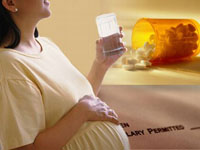 They said antidepressants, known as selective serotonin reuptake inhibitors or SSRIs, which affect a message-carrying brain chemical called serotonin, may raise the risk of pre-term delivery and affect a baby's health at birth.

Some prior studies have found that drugs in this class can cross the placenta and appear in the umbilical cord blood of babies whose mothers have taken them.

"The study justifies increased awareness to the possible effects of intrauterine exposure to antidepressants," Dr. Najaaraq Lund of the Bandim Health Project in Guinea-Bissau, and colleagues wrote in the Archives of Pediatrics and Adolescent Medicine.

About one in 10 pregnant women experience depression during pregnancy. Because depression can jeopardize a pregnant woman's health, doctors often prescribe antidepressants, but it is not yet clear how these drugs affect a baby's health.

To study this, Lund and colleagues analyzed data on 57,000 pregnancies and deliveries at Aarhus University Hospital in Skejby, Denmark, between 1989 to 2006.

Women who took antidepressants while pregnant delivered their babies five days earlier than other women in the study, and had twice the risk of pre-term delivery than women with no history of psychiatric illness.

Although treating depression might be warranted, the team said more studies are needed to see if some drugs in the class pose less risk than others.