2009 physics Nobel Prize is shared by scientists who corralled light to transform our communications systems. Briton Charles Kao is lauded for his work in helping to develop fibre optic cables, the slender threads of glass that carry phone and net data as light. 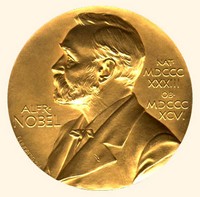 Willard Boyle and George Smith, both North Americans, are recognised for their part in the invention of the charge-coupled device, or CCD.

The Royal Swedish Academy of Sciences, which administers the prize, said half of the award would go to Kao, who was born in Shanghai, China, in 1933 and holds UK-US citizenship, BBC News reports.

It was also reported, half of the $1.4 million prize went to Charles K. Kao for insights in the mid-1960s about how to get light to travel long distances through glass strands, leading to a revolution in fiber optic cables. The other half of the prize was shared by two researchers at Bell Labs, Willard S. Boyle and George E. Smith, for inventing the semiconductor sensor known as a charge-coupled device, or CCD for short. CCDs now fill digital cameras by the millions.

The prize will be awarded in Stockholm on Dec. 10.

Fiber optic cables and lasers capable of sending pulses of light down them already existed when Dr. Kao started working on fiber optics. But at that time, the light pulses could travel only about 20 meters through the glass fibers before 99 percent of the light had dissipated. His goal was to extend the 20 meters to a kilometer. At the time, many researchers thought tiny imperfections, like holes or cracks in the fibers, were scattering the light.

According to the academy in its prize announcement, the optical cables in use today, if unraveled, would equal a fiber more than a billion kilometers long, The New York Times reports.

Anyone who uses a digital camera can thank the trio for their breakthrough work in that field enabled the invention of digital cameras and made quicker the transmission of information, such as text, music and images, over fiber optic cables, AHN reports.