A maximum of three Nobel Laureates and two different works may be selected for the Nobel Prize in Physiology or Medicine. This year all of three winners are American citizens. They won the Nobel prize for medicine for discovering and identifying telomerase, the enzyme that renews the little caps on the end of chromosomes whose natural fraying underlies aging and cancer. 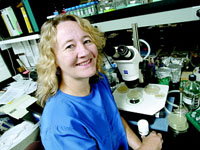 Blackburn, Greider and Szostak's work laid the foundation for studies that have linked telomerase and telomeres to human cancer and age-related conditions.

Work on the enzyme has become a hot area of drug research, particularly in cancer, as it is thought to play a role in allowing tumour cells to reproduce out of control.

Carol Greier, 48, who grew up in Davis, California, where her father was a physicist, said the Nobel prize recognized the value of discoveries driven by pure curiosity.
"We had no idea when we started this work that telomerase would be involved in cancer, but were simply curious about how chromosomes stayed intact," she said in an emailed statement.

Greider started research on telomerase in the late 1970s with Blackburn, her academic adviser, who pioneered research into chromosomes and DNA at the University of California.

An outspoken researcher, Blackburn was fired in 2004 from then-President George W. Bush's Council on Bioethics for her criticism of his policy on embryonic stem cell research.

Blackburn, who was born in 1948 to a family of scientists, and her two fellow Nobel recipients, were among those considered likely winners in some forecasts.

Telomeres had been discovered decades before but Blackburn wondered how they got copied, in essence, renewing the cell's life.

Blackburn is with the University of California, San Francisco, Greider is with the Johns Hopkins School of Medicine in Baltimore. Szostak, 56, at Harvard Medical School since 1979, is currently at the Massachusetts General Hospital in Boston and the Howard Hughes Medical Institute.

Medicine is traditionally the first of the Nobel prizes awarded each year. The prizes for achievement in science, literature and peace were first awarded in 1901 accordance with the will of dynamite inventor and businessman Alfred Nobel.