Researchers claim that the stream of bubbles continually transfer flavour from the bottom of the glass to the top, releasing it like an "aerosol" at the surface. They believe that it is this "aroma lift" that gives the drink its unique flavour and separates it from other wines. 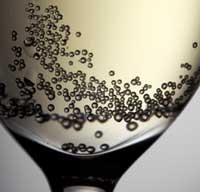 Carbonisation of champagne has always been one of its big selling points as it causes the "pop" of the cork. It also gets the alcohol into the bloodstream more quickly. Its characteristics have combined to make the drink become a mainstay of celebrations and sell more than 200 million bottles a year.

But now according to the findings published in Proceedings of the National Academy of Sciences, scientists believe the bubbles add to the flavour. Professor Gerard Liger-Belair, a chemist at Reims University in the Champagne region of France said the bubbles do more than "tickle your nose", Telegraph informs.

A glass of Champagne, it turns out, is like a mini-ocean. When the cork is popped, bubbles of carbon dioxide form and rise to the surface. And a study by European researchers shows that these bubbles concentrate surfactants, many of which contribute to Champagne’s odor and flavor, in the air above the beverage.

The researchers first used a scattershot approach that revealed potentially hundreds of compounds that were, essentially, being dragged out of the Champagne and becoming concentrated in the air above it. More discriminating analysis showed that several dozen of these compounds probably played a role in producing the beverage’s aroma or flavor, New York Times reports.

According to Dr Goode, the research demonstrates that using fluted glasses for sparkling wine and champagne is more than simply a matter of etiquette.

"Glasses that encourage more bubbles to come up are going to be better," he says. "At the bottom of proper champagne glasses, they put a little bit of (rough) glass, which encourages the nucleation of the flow of bubbles," BBC News report.