Economic Downtown Contributes to Our Health

If blue mood could be called a disease the results of the new U.S. study would be different, but according to the research a bad economy promotes good health. 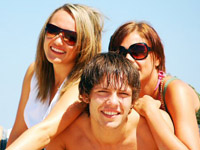 Economic Downtown Contributes to Our Health

The Great Depression that began with the stock market crash of 1929 was the economic low point of the 20th century. The economy shrank at annual rates reaching 14 percent, and unemployment peaked at 22.9 percent. The recovery didn’t begin until the middle of 1933.
And yet, public health was never better, according to a variety of measures laid out in a report by researchers from the University of Michigan.

Life expectancy, which had been stable or declining throughout the 1920s, increased during the Great Depression. For instance, life expectancy for nonwhite men fell by 8.1 years during the economic growth years of 1921 to 1926 but grew by the same amount between 1929 and 1933. Nonwhite women lost 7.4 years of life expectancy in the early and mid-1920s and gained back 8.2 years during the Depression, according to the study in Tuesday’s edition of Proceedings of the National Academy of Sciences.

In the 1930s, about two-thirds of all deaths were attributable to just six causes. Deaths due to cardiovascular and renal diseases rose during the 1920s but stabilized in the early 1930s. Tuberculosis deaths, which fell sharply in the '20s, kept on falling in the '30s. Influenza and pneumonia were less deadly in the 1930s than they had been the previous decade.

Several of these measures oscillated quite a bit during the 1920s and 1930s, as did the country’s gross domestic product. Using statistical techniques, the researchers were able to correlate these changes in health and economic conditions throughout the 20-year period.

The researchers did find one exception to the overall trend. Suicides rose when times got worse. But since suicides accounted for fewer than 2% of all deaths, they didn’t change the overall findings.