The Internet giant Google celebrated its 11th birthday yesterday, that is Sept. 27, and in their trademark manner they did it with panache and humor. Google, on Sept. 27, 2009, was spelt, or rather misspelt, worldwide as “Googlle”. 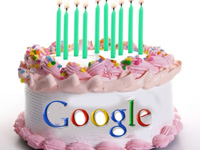 Google has often known to be cracking these jokes on their logos, which have become famous by the name of Doodles.

Arguably the most powerful brand in the world, and surely the most visited website ever, the company was started by Larry Page and Sergey Brin while they were students at Stanford University. Incorporated on Sept. 4, 1998, it has been named by the People magazine as the “best place to work”.

Google changed the term “search it online” to simply “google it”, and has achieved a cult status due to various reasons. The reverence that this corporate giant generated was due the brilliant work environment they provided, their philanthropy, the environmentalism they imbibed, and the humor they inducted. The doodles were a part of the humor bit.

Doodles became an instant hit with the public, the first doodle being made for the “Burning Man Festival” of 1998, designed by Larry Page and Seregy Brins, but their ex-intern Dennis Hwang has been designing their logos for a long time now.

Some of the historical ones were those of the three UFOs on the anniversary of HG Wells, the celebratory drums on the independence of Mexico, the Valentines day ones, or the frequent misspellings.

Google had come under criticism for not having special logos for American patriotic holidays, such as Memorial Day and Veteran's Day. So, in 2007, they featured a special doodle for Veteran's day, all day long.

Google doodles have been designed for the birthdays, or other significant days of various noted scientists and artists, which include Albert Einstein, Leonardo da Vinci, Michael Jackson, Louis Braille etc.

Apart from that, they also have been introduced when the company has its own significant days, like the 11th anniversary this time.

“Doodle for Google” competitions were organized where students from K-12 countries would come together and the reinvent the Google homepage logo. There are various websites which have archives for the numerous doodles which Google had come up with. One of the leading one is: thenextweb.com.

The Money Times contributed to the report.