Water on the Moon: Further Discovery

Three separate missions examining the lunar surface have found clear evidence of water there, apparently concentrated at the poles and possibly formed by the solar wind. 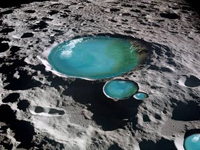 Water on the Moon: Further Discovery

The reports, to be published in the journal Science on Friday, show the water may be actively moving around, forming and reforming as particles mixed up in the dust on the surface of the moon.

Carle Pieters of Brown University in Rhode Island and colleagues reviewed data from India's Chandrayaan-1 mission -- India's first mission to the moon -- and found spectrographic evidence of water. The water seems thicker closer to the poles, they reported.

"When we say 'water on the moon,' we are not talking about lakes, oceans or even puddles. Water on the moon means molecules of water and hydroxyl (hydrogen and oxygen) that interact with molecules of rock and dust specifically in the top millimeters of the moon's surface," Pieters explained in a statement.

"These reports of lunar surface water coincide with intense interest in water at the poles of the Moon," Paul Lucey of the University of Hawaii, who was not involved in the research, wrote in a commentary. "There may be much 'wetter' regions to be discovered far from the sites that have been sampled to date," Lucey added.

"It is also possible that rare water-bearing minerals previously observed in lunar samples, but argued to be terrestrial contamination, might be indigenous. Perhaps the most valuable result of these new observations is that they prompt a critical reexamination of the notion that the Moon is dry. It is not."

Next month, NASA's Lunar Crater Observation and Sensing Satellite or LCROSS mission will try to detect water by deliberately crashing a large spacecraft onto the moon.