It's known for a long time  that regular exercise is an important part of a healthy pregnancy,  but according to new research  physical activity of  pregnant women may also reflect on the weight of their babies. 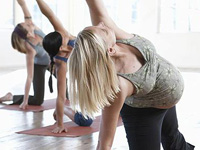 To clarify the issue, the researchers analyzed data from the Norwegian Mother and Child Cohort Study of 36,869 normal, single pregnancies. They collected data on newborn birth weight from the Medical Birth Registry of Norway.

In their study, the average birth weight was just shy of 8 pounds, 2 ounces, and 11 percent of newborns were classified as being in the 90th percentile or more of birth weight, categorizing them as "excessive."

For first time moms, there was an association between regular exercise -- at least three times per week -- and a reduced risk of an overweight baby.

The risk of having an overweight baby also trended downward with exercise among women in their second or later pregnancies, but the difference did not reach statistical significance.

Among those experienced moms, the risk of an overweight baby was lowest among those who danced for exercise at week 17 of their pregnancies and those who engaged in low-impact aerobics.

On the other hand, women in second-or-later pregnancies were more likely to have heavy babies if they trained in fitness centers during week 17 or swam during week 30.

For first-time mothers, women, walking decreased risk at weeks 17 and 30, as did running at week 17.

One possible explanation for exercise lowering risk of excessive birth weight among newborns is the effect of aerobic exercise on glucose tolerance, the researchers said.

Research has shown that moderate physical activity during pregnancy can lower glucose levels in both disease-free women and those who have gestational diabetes.

The study also found that exercising for three months prior to pregnancy didn't have any effect on the odds of having heavier babies for either nulliparous (first-time mothers) or multiparous women (second-time or more mothers), the researchers said.