U.S. researchers released   disterbing data concerning cleanliness in shower rooms. They discovered that many showerheads are dirty and may be covering people in a daily dose of bacteria that could make them sick. 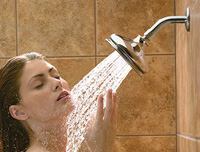 "If you are getting a face full of water when you first turn your shower on, that means you are probably getting a particularly high load of Mycobacterium avium, which may not be too healthy," said researcher Norman Pace in a statement.

Mycobacterium avium is linked to pulmonary disease, causing symptoms such as a persistent drug cough, breathlessness and fatigue, and most often infects people with compromised immune system but can occasionally infect healthy people.

Pace said research at the National Jewish Hospital in Denver found that increases in pulmonary infections in the United States in recent decades from so-called "non-tuberculosis" mycobacteria species like Mycobacterium avium may be linked to people taking more showers and fewer baths.

He said water spurting from showerheads can distribute pathogen-filled droplets that suspend themselves in the air and can easily be inhaled into the deepest parts of the lungs.

The problem with showerheads is that the insides provide a moist, warm, dark haven where bacteria can form sticky "biofilms" that allow them to gain a foothold and eventually set up residence in the device.

The researchers, however, said it was still probably safe for most people to get into the shower and recommended people with compromised immune systems due to HIV or immune-suppressing drugs, use metal showerheads and change them regularly, according to Reuters' report.