Scientists To Search Lunar Crater Cabeus A For Water

NASA's LCROSS lunar probe is to slam into the moon next month to look for signs of water. The  destination of the spacecraft is  the south polar crater Cabeus A. 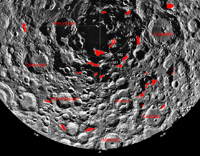 Scientists To Search Lunar Crater Cabeus A For Water

The $79 million moon-impacting spacecraft is carrying an empty Centaur rocket stage, which has about the same mass as a sports utility vehicle and will be hurled into the lunar surface on Oct. 9.

Professional astronomers and backyard skywatchers will be watching the spectacle.

"The purpose of our missions is to see if there may indeed be some water ice located in some permanently shaded crater positions on the south pole of the moon," said LCROSS project manager Daniel Andrews. Other missions have provided tantalizing but so-far inconclusive evidence for water ice there.

LCROSS will first release its Centaur stage rocket to impact the crater, then LCROSS itself will impact the lunar surface at about 5,580 mph (8,980 kph), and the resulting ejecta can be examined for signatures of water.

"It will kick up whatever is on the floor of the crater; that may very well include water ice," Andrews said.

More than a decade ago, the Lunar Prospector mission detected hydrogen deposits around the moon's south polar region, suggesting that some form of water ice may exist where the sun never shines.

Finding water on the moon would be a boon for future manned missions because it would eliminate the need to haul it up from Earth. The ice could be melted for drinking water, and hydrogen could be extracted for fuel.

Cabeus A was one of several finalist craters — including Shackleton, Shoemaker and Hayworth craters — examined by the team for many months. The crater sits at 81 degrees south on the moon and is relatively large (about 40 kilometers across).

The crater also meets other criteria to achieve a successful impact that throws up ejecta in a way that telescopes will be able to see it: "We want to hit a nice flat, fluffy place," said LCROSS principal investigator Anthony Colaprete.

Cabeus A seems to fit the bill, with plenty of flat areas for the spacecraft to smash into.

Data from LCROSS's sister craft, the Lunar Reconnaissance Orbiter, and the Lunar Prospector show a spot along the rim of the crater that seems to have a relatively high concentration of hydrogen, and so potentially, water.

The impact will be observed by LRO, the newly refurbished Hubble Telescope, a few other space-based telescopes, and several ground-based observatories.

NASA will even be soliciting amateur observations, said Jennifer Heldmann, lead for the LCROSS observation campaign.

LCROSS was launched in June along with LRO, which will map the lunar surface in unprecedented detail.

The team reported that the spacecraft is in good health, despite a malfunction that caused the craft to burn through half of its propellant a few weeks ago, and everything looks good for impact, Space.com reports.