Negative Effect Of Tysabri Under Scrutiny

Researchers explain the cases of  sometimes-fatal side effect of Biogen Idec Inc.’s Tysabri, a treatment for multiple sclerosis, through its wrong influence on a type of cell. It turns out that  the drug makes a type of cell in patients’ immune systems less effective against a virus. 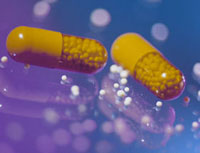 Negative Effect Of Tysabri Under Scrutiny

The result is a brain disorder called progressive multifocal leukoencephalopathy or PML, which occurs after the virus defeats immune defenses, mutates and penetrates the brain. Researchers led by Igor Koralnik, a Harvard Medical School neurologist in Boston, found that patients taking Tysabri had increases in the virus in their blood and urine, according to a report released today by the New England Journal of Medicine.

Tysabri’s link to PML prompted the U.S. Food and Drug Administration to suspend the product’s sales in 2005, leading patients to plea for, and win, the product’s return. While the study identifies why the drug may enable the illness in patients taking Tysabri, the research doesn’t show a way to detect who may be most at risk for PML, said Eugene Major, the author of a related editorial in the journal.

Multiple sclerosis (abbreviated MS, also known as disseminated sclerosis or encephalomyelitis disseminata) is an autoimmune disease in which the body's immune response attacks a person's central nervous system (brain and spinal cord), leading to demyelination. Disease onset usually occurs in young adults, and it is more common in females.