A poll commissioned by the Health Ministry revealed that 24% of the Israeli public will refuse to be inoculated against the H1N1 virus, when a vaccine becomes available. 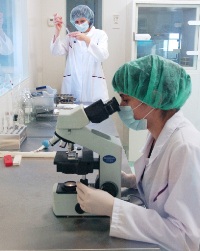 According to the survey, 69% of Israelis are inclined to be vaccinated. The Health Ministry is expected to launch a swine flu awareness campaign ahead of the coming school year. (Meital Yasur-Beit Or) , Ynetnews reports.

Meanwhile, a total of six deaths and 3485 cases of swine flu were confirmed in South Africa on Monday, the National Institute for Communicable Diseases (NICD) said.
"As at 17 August 2009, there are 3485 laboratory confirmed cases of pandemic influenza A (H1N1) 2009, 'swine flu', in South Africa," the NICD said in a statement.
"Six A H1N1-related deaths have been confirmed... four of the cases had no underlying conditions, one patient was pregnant and another was pregnant and diabetic." , Independent Online reports.

However, two more Israelis died after contracting swine flu, bringing the death total as a result of the virus to nine.

A dozen other Israelis were reported to be in serious condition in intensive care units throughout the country.

Last week an autopsy showed that one man recorded as dying from swine flu had died of another cause , Jewish Telegraphic Agency reports.