Two studies suggest a new osteoporosis drug lowers the risk of bone fractures as well as or better than current medicines. The genetically engineered drug, called denosumab, was tested in older women and men with prostate cancer . It's made by biotech company Amgen and is being reviewed this week by Food and Drug Administration advisers, Chicago Tribune reports. 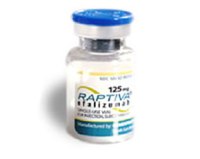 The FDA said it was concerned denosumab "has the potential to affect multiple layers of the immune system," which could result in the development of serious infections and cancer. In order to treat or prevent osteoporosis, denosumab is designed to inhibit a protein known as RANK Ligand that's involved with bone destruction. However, the same protein also plays a role in the body's immune system.

The drug, called denosumab, blocks production of cells called osteoclasts that break down bones, and physicians have high hopes for it because of its efficacy, ease of administration and apparent lack of severe side effects. But it's a biological agent rather than a chemical, meaning it's difficult to produce, and it is likely to be the highest-priced osteoporosis drug in an already-crowded marketplace , Los Angeles Times reports.