Microsoft and Nokia are to announce a deal to bring Mobile Office to hundreds of millions of mobiles, according to CNet. No solid details right now, but a press conference on Wednesday is likely to clear things up, guardian.co.uk reports. 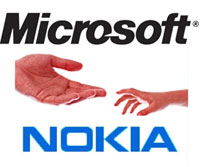 The agreement, which is yet to be officially announced comes as Microsoft sees its dominance being increasingly challenged by competition like Google Docs that allow web-based office application access. With phones getting better and more "web-friendly", users are using their phones to view, edit and transfer official documents, spreadsheets and presentations, right from their phones. So, it was only a matter of time when Microsoft had to partner with Nokia, arguably the worlds largest manufacturer of mobile phones, Techtree.com reports.

The alliance between the world's largest software company and the world's biggest manufacturer of cellphones would help Microsoft play a broader role in mobile devices, as well as strengthen its Office business in competition with those free online applications provided by Google, Sun Microsystems and others.

Microsoft already produces a version of Office for cellphones running Windows Mobile, but there is also other software that allows users to open Office files on BlackBerrys and other devices, Xinhua reports.

Meanwhile, under such an alliance, the upcoming Office 2010 might be ported to Nokia's Symbian S60 smartphone platform, said independent analyst Jack Gold. Or, less likely, mobile Office 2010 might be set to run on the Maemo mobile Linux operating system that Nokia also supports, Computerworld reports.