A new study found, that injuries to American children during physical education classes increased by 150 percent from 1997-2007. 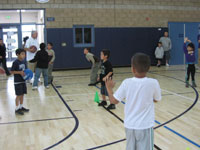 Yet that may have less to do with lively gym programs than with lack of adult supervision, experts said. A decline in school nurses and larger class sizes could be to blame, said the study's senior author Lara McKenzie of Nationwide Children's Hospital in Columbus, Ohio.

"Children got hurt by running into equipment or having contact with structures or other persons," McKenzie said. "They had heat stroke, fainting and heart palpitations." Boys had more cuts and broken bones than girls. Girls were more likely to suffer strains and sprains, The Associated Press reports.

For the study, McKenzie's team used data from the National Electronic Injury Surveillance System of the U.S. Consumer Product Safety Commission to gather information on PE-related injuries. During the 11 years of the study, 405,305 children and adolescents were treated in emergency departments for injuries stemming from their PE classes, the researchers found.

"Most of the patients, about 98 percent of the cases, were seen and released," McKenzie said. "Of those who were hospitalized, about 75 percent were boys."

Almost 70 percent of the injuries happened during running, basketball, football, volleyball, soccer or gymnastics, she said.

The researchers noted that their study may have underestimated total physical education-related injuries because the NEISS database only captures injuries treated in emergency departments.

The researchers said that identifying phys-ed injuries is the first step toward preventing them, a subject that warrants more research because efforts are underway to further increase participation in gym class to combat obesity, MedPage Today reports.