It's that time of the year when many beaches are packed with surfers, swimmers - and sometimes, human and animal waste. 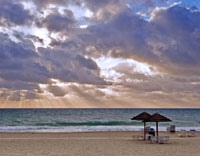 On Wednesday, a national environmental group released its annual rankings of beach conditions. Once again, Virginia and North Carolina have some of the nation's cleanest beaches, The Virginian-Pilot reports.

However, according to the Natural Resources Defense Council's (NRDC) 19th annual beach water report released on July 27, Pollution of area beaches is getting worse and endangers beach goers.

Meanwhile, national environmental group says Indiana beaches on the lake are among the most polluted in the nation.

An Indiana Department of Environmental Management spokeswoman called the report accurate but not reason for alarm.

"People should not be scared. They should be cautious, however," Amber Finkelstein said. "The reason we have our beach-monitoring program is so that we can do these tests, monitor the water quality and let people know what the water quality is like," The Indianapolis Star reports.