New research found, people who get married and stay married may enjoy better health than the perpetually single, but losing a spouse could take a significant health toll. 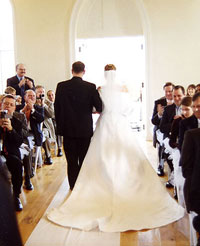 Historically, studies have found that married people as a group tend to be in better health than singles - though recent research suggests the health advantage of marriage may be fading.

In the new study, researchers found that middle-aged and older Americans who were currently married tended to give higher ratings to their health than their never-married counterparts. They also reported fewer depression symptoms and limits on their mobility, Reuters reports.

A Chicago study involving 8,652 people aged 51 to 61 found divorced people have 20% more chronic illnesses such as cancer than those who never marry.

The figure only drops to 12% for those who remarry, researchers write in the Journal of Health and Social Behaviour.

People who remarried had 12% more chronic health conditions than those continuously married, which was slightly less than the 20% for the divorced or widowed who did not remarry, BBC News reports.

Researchers have known for years that marriage is good for your health, but they've been less clear on how you'll do if you lose your spouse to divorce or death.

The study also suggests that divorce can be so traumatic that not even tying the knot again is enough to reverse the physical and mental toll.

So does this mean spouses should stick together even when the going gets really tough?

Dr. Catherine Birndorf, associate professor of psychiatry at New York Presbyterian Hospital-Weill Cornell Medical Center said, "If someone's in a bad marriage, I would want to try and help them figure out how to make it better. But I wouldn't rule out the idea that it may need to end in divorce versus staying together for the sake of health."

In fact, Dr. Jeff Gardere, a clinical psychologist, said on "The Early Show" Tuesday, if you're in a "toxic" relationship that involves physical or mental abuse or in a relationship where you just can't get along, it's best to get out of it because the health benefits of divorce are much better than staying in a bad situation.

However, if you are thinking of getting a divorce, Gardere said you should have a doctor on hand, CBS News reports.