Comet Smacks into Jupiter on Sunday

Astronomers were scrambling to get big telescopes turned to Jupiter on Tuesday to observe the remains of what looks like the biggest smashup in the solar system since fragments of the Comet Shoemaker-Levy 9 crashed into the planet in July 1994. 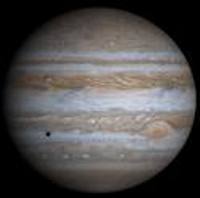 Comet Smacks into Jupiter on Sunday

Something — probably a small comet — smacked into Jupiter on Sunday, leaving a bruise the size of the Pacific Ocean near its south pole. Just after midnight, Australian time, on Sunday, Jupiter came into view in the eyepiece of Anthony Wesley, an amateur astronomer in Murrumbateman. The planet was bearing a black eye spookily similar to the ones left in 1994, New York Times reports.

"We're not sure how large this fragment could have been," Leigh Fletcher, a researcher at the Jet Propulsion Laboratory in Pasadena, Calif., told CNET.

"But it certainly had the energy and the momentum that was sizable enough that when it hit the upper atmospheric layers of Jupiter, it created a kind of splash of material that lofted aerosols and gases and various other particulates to really high altitudes." , CNET News reports.

Meanwhile, scientists were able to follow all 20 or so fragments as they entered the outer atmosphere, made up mostly of hydrogen and helium.
This time, the object that hit the planet was not observed. The first announcement of a new scar on the planet's exterior came Sunday from amateur Australian astronomer Anthony Wesley, Los Angeles Times reports.